What Is the “Ringing Cedars of Russia” Book Series? (Anastasia Book)

← Back to the blog 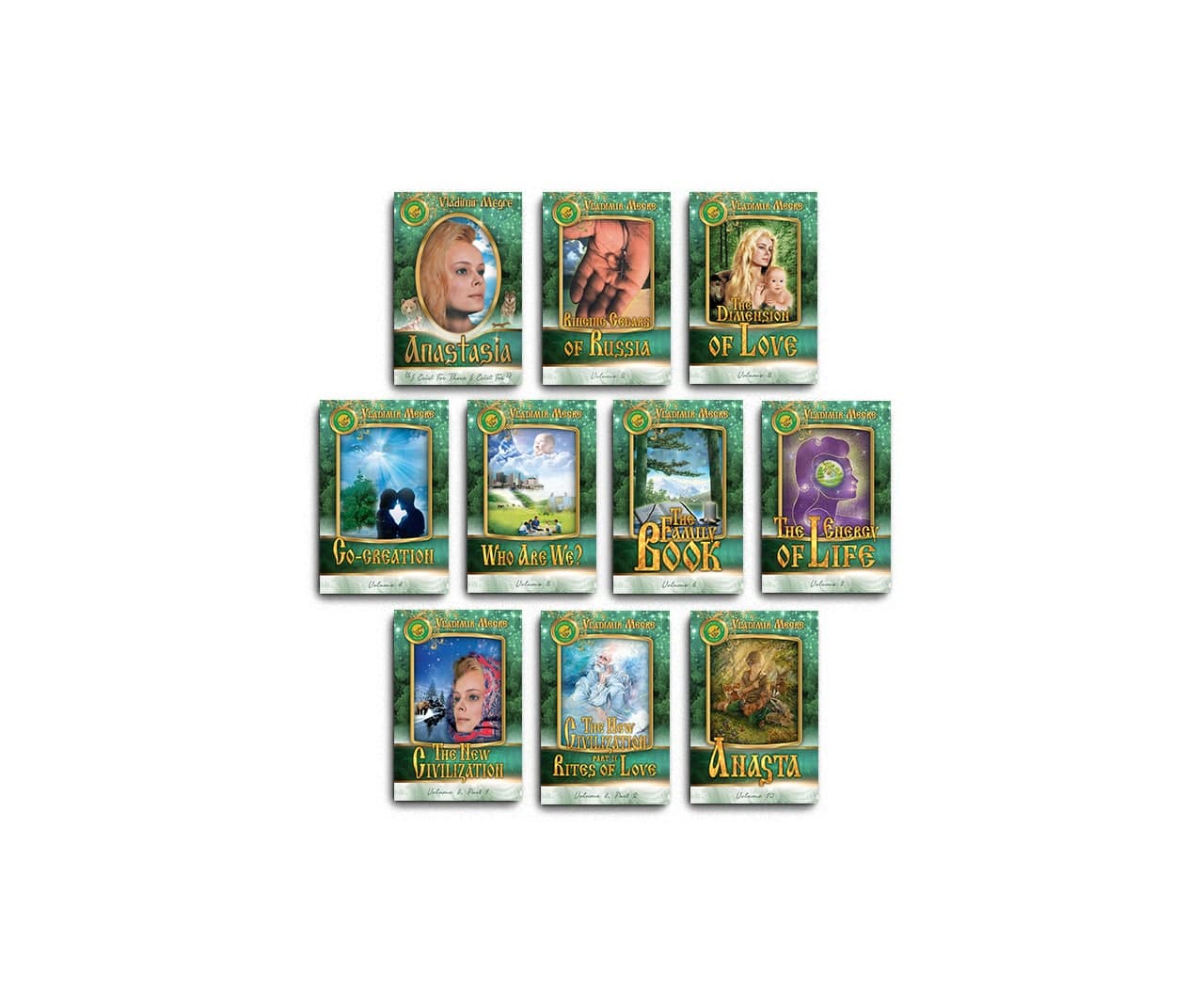 So you’ve heard of the Anastasia/Ringing Cedars books and are wondering what they’re all about. This article will attempt to answer that question.

In “The Ringing Cedars of Russia” series by Владимир Мегре, Анастасия explains the way to lead the happiest life possible here on the Earth.

Anastasia shares world-changing insights on the purpose of mankind’s existence, child raising, and restoring the world to a pristine flourishing garden. The purity and power of her words will inspire your soul, and ignite a joy deep within you that will inspire you to change your life as millions of others have after reading the Ringing Cedars books. The books touch deeply on every topic of life, and are an incredible and thrilling read. The idea of Kin’s Domains was first presented by Anastasia in the Ringing Cedars series.

The Ringing Cedars books have sold more than 20+ million copies worldwide, over 700,000 (and likely much more at this point) in the USA, with no advertising, and have been published in 20+ languages.

The story of the Author, Vladimir Megre, and how the Ringing Cedars series was written:

Vladimir Megre, born in 1950, was a successful and well-known entrepreneur in the city of Novosibirsk. In the spring of 1994, Vladimir chartered three riverboats and carried out a four month expedition to the Russian far north, leaving from Novosibirsk and travelling along the Ob River. The goal was to trade and create economic activity with the residents of the far north.

During one of their stops in a very small village along the river, Vladimir met with two unusual elderly men who told him many interesting and incredible things about Man, the Universe, and Siberian Cedar trees.

About the Cedar, the younger of the two elderly men told him, “God created the cedar to store cosmic energy…

“When someone is in a state of love they emit a radiant energy. It takes but a split second for it to reflect off the planets floating overhead and come back to Earth and give life to everything that breathes.

“The Sun is one of those planets, and it reflects but a tiny fraction of such radiance….

“Cedars live to be five hundred and fifty years old. Day and night their millions of needles catch and store the whole spectrum of bright energy. During the period of the cedars’ life all the celestial bodies which reflect this bright energy pass above them. Even in one tiny piece of cedar there is more energy beneficial to Man than in all the man-ade energy installations taken together. Cedars receive the energy emanating from Man through Space, store it up and at the right moment give it back. They give it back when there is not enough of it in Space — and consequently, in Man — or in everything living and growing on the Earth.

“Occasionally, though very rarely, one discovers cedars that have been storing up energy but not giving back what they have stored. After five hundred years of their life they start to ring. This is how they talk to us, through their quiet ringing sound — this is how they signal people to take them and cut them down to make use of their stored-up energy on the Earth. This is what the cedars are asking with their ringing sound.

This is where the title of the series comes from; The Ringing Cedars of Russia.

The two men told Vladimir they had discovered a cedar like this, and asked him if he would lend his crew to cut it up and distribute it to the people who needed it. At the time, Vladimir couldn’t carry out their request. They asked a member of his crew to return the next year.

Vladimir returned to Novosibirsk, and shortly after arriving began to do deep research into the Siberian cedar trees, still intrigued by what the old men had told him. He began to discover the tremendous healing potential of the cedars, their value in folk medicine, and historical and Biblical references to the cedar. He also discovered the incredible healing power and commercial value of pure Siberian cedar oil, produced according to traditional Siberian methods on 100% wooden presses. He decided to further discover the lost secrets of producing this oil, and produce the oil himself. With that, he planned a second trip along the Ob River.

During the second trip, he discreetly made a stop not too far from where he met the old men the year before. He traveled up the river a bit and reached the village.

It was there he spotted a woman standing alone on the riverbank. He greeted her, and told her about the two old men he had met the year before. She told him, “It was my grandfather and great-grandfather who talked with you here last year, Vladimir.”

After this, he spent three days with the woman, Anastasia, deep in the Siberian taiga.

She told him about God, Man, child-raising, healing, nature, gardening, co-creation and much much more.

She displayed incredible physical, mental, and spiritual abilities. There in the taiga, she lived in complete harmony with God, the Universe, and the Space around her.

Anastasia shares her knowledge with Vladimir:

Here is a very small look at some of the things Anastasia told Vladimir during his first three day stay with her (these are all taken from Book 1, “Anastasia”, published by the Ringing Cedars Press):

1. “Man has still not invented anything that is not already in Nature.”

2. “God is the interplanetary Mind, or Intelligence. He is not to be found in a single mass. Half of Him is in the non-material realm of the Universe. This is the sum total of all energies. The other half of Him is dispersed across the Earth in every individual, in every Man.”

3. Vladimir: “What do you think awaits our civilization?”
Anastasia: “In the long term, a realisation of the futility of the technocratic path of development and a movement back to our pristine origins.”

5. “Everything — but everything — on the Earth, every blade of grass, every little bug, has been created for Man, and everything has its individual appointed task to perform in the service of Man.”

6. “Every seed you plant contains within itself an enormous amount of information about the Universe. Nothing made by human hands can compare with this information either in size or accuracy. Through the help of this data the seed knows the exact time, down to the millisecond, when it is to come alive, to grow, what juices it is to take from the Earth, how to make use of the rays of the celestial bodies — the Sun, Moon and stars….These fruits are designed to sustain Man’s life. More powerfully and effectively than any manufactured drugs of the present or future, these fruits are capable of counteracting and withstanding any disease of the human body….In order for the seed of a cucumber, tomato, or any other plant grown in one’s plot to have such information, the following steps are necessary…”

7. “Nature and the Mind of the Universe have seen to it that every new Man is born a sovereign, a king! He is like an angel — pure and undefiled. Through the still soft upper part of his head he takes in a huge flood of information from the Universe. The abilities inherent in each newborn child are such as to allow him to become the wisest being in the Universe, God-like.”

8. “In the whole of the Universe there is no being capable of more powerful development and greater freedom than Man….God — the Great Mind — created Man and to no one else gave He more than to Man.”

Vladimir’s experience with Anastasia deeply touched him and transformed him. Anastasia asked him to write a book about everything she had shared with him and that he experienced.

About this book, Anastasia told him, “In the book you are going to write there will be unobtrusive combinations, formulations made up of letters, and they will arouse in the majority of people good and radiant feelings. These feelings are capable of overcoming ailments of body and soul, and will facilitate the birth of a new awareness inherent in people of the future. Believe me, Vladimir, this is not mysticism — it is in accord with the laws of the Universe….Write about everything you have seen, hold back nothing — neither the bad nor the good, nor even the intimate or absurd — and then they [the word combinations] will be preserved.”

Vladimir returned home, fully determined to make good on his promise to Anastasia to write this book. He has returned to see her many times, and has written ten books to date. Currently, the Ringing Cedars books have sold more than 20+ million copies worldwide, over 700,000 (and likely much more at this point) in the USA, with no advertising, and have been published in 20+ languages.